This sub-module is based on the teachings of Swami Dayananda and Swami Viditatmananda.
Expand All Sections

In this sub-module we’ll delve more deeply into how Vedanta is different from Karma Kanda, know the basic premise of Vedanta, understand the role Adi Shankaracharya played in this tradition. We’ll also see why we use the term “Advaita” in conjunction with Vedanta.

The first section of the Veda (Karma Kanda) serves those who have not yet identified the basic human problem. It is meant for those who seeks wealth, health, power, security, pleasures and comforts in this world.

The student of Karma Kanda may gain some pleasures and comforts from his pursuits, but still remains a limited person. The result of all actions (Karma) are always time-bound and limited.

How is Vedanta Different

Vedanta, the second section of the Veda, is for those who have identified the basic human problem. This section is for the person who knows that seeking security and pleasures in this world cannot remove his or her sense of limitation.

From the analysis of their own experience a discriminating person comes to the conclusion that “Most of the time I seem to be a limited, inadequate being, but what I long to be is a limitless, complete being.. all the time.”

This person understands that the limitlessness and completeness that they seek can only be gained through knowledge, and not through any action. The results of any action are always limited, and cannot give you limitlessness.

Liberation comes only through knowledge. It is this knowledge – the knowledge that solves the fundamental human problem – that is known as Vedanta.

The vision of Vedanta is that one is a complete, full being, lacking nothing.

Once you realize that you are whole and complete, you no longer need to know or gain anything.

The ideas of Vedanta are not meant to be believed in, they are to be understood, because belief is ignorance.

Vedanta provides various means (Sadhana) for assimilating the knowledge of oneself. Vedanta, by constant exposure, helps to make the person see. It’s a process whereby, over a period of time, the clarity grows.

Soon, even in negative situations, you come to find that you are okay with yourself. Vedanta helps to solve the problem of human suffering by cognitive changes and a way of life.

Vedanta is a teaching tradition and the tradition looks upon it as a Pramana (means of knowledge). Either you accept it as a pramana or you do not even touch it, because to prove that it is not a Pramana, there is no Pramana. The validity of an independent means of knowledge is not proved by another means of knowledge. The eyes see and the ears hear. Only ears have to prove whether they hear or not. Eyes have no access to prove whether the ears hear or not. Similarly whether Vedanta works or not, only Vedanta has to prove, not anything else. Therefore looking upon Vedanta as a Pramana puts you in a frame of mind which is called Shraddha. By this Shraddha (faith pending investigation) one gains the knowledge that Atma (Self) is Brahman, the limitless. That is why the Bhagavad Gita, says, śraddhāvān labhate jñānaṁ – the one who has Shraddha gains the knowledge. 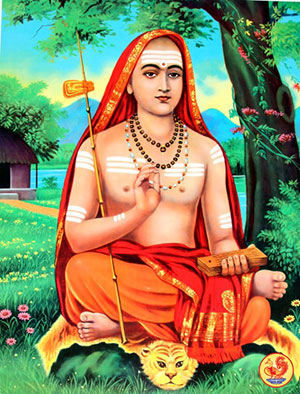 When we study Vedanta it’s also important to know about the people who contributed to, sustained and advanced the tradition. In recorded history perhaps the person with the greatest contribution to the Vedanta tradition and Hinduism in general could be none other than Adi Shankaracharya.

There is no unanimity among scholars regarding the date of Shankara. Some scholars assign Shankara to the 5th century B.C, some others fix the date as 8th century A.D. The official website of Sringeri Matha, a centre of learning started by Adi Shankara in South India, mentions his birth year as 8th century. What is certain is that he was born in a place called Kalady in Kerala, South India.

During that time there was a great deal of confusion and misconceptions regarding religion and scriptures. Many different schools of philosophies existed and the common man was unclear about the teachings of the scriptures.

There were also many distortions in the interpretation of the various rituals and stipulations of the scriptures. It was in such desperate times that Adi Shankaracharya appeared.

The tradition considers Adi Shankara to be an incarnation of Lord Shiva because in a short life span of 32 years his accomplishments were so phenomenal.

While many legends about Adi Shankara exist, not many historical facts are known. We can only learn about him through his works.

His most important work is his commentaries on 10 Upanishads, the Brahma Sutras and the Bhagavad Gita. His commentaries provided a complete understanding of the teachings contained in the foundational texts of the tradition.

Adi Shankara was a great teacher who travelled across India as many as 3 times. He conducted debates with scholars from other philosophies, and many of his opponents subsequently became his disciples.

He had a large following in India among Kings, scholars and even the common people. Adi Shankara can be credited with reviving the Vedic culture and Hindu tradition. If not for him, India would be perhaps different from what it is today.

He took Sannyasa at the age of eight; by the time he was twelve he had completed the study of all scriptures like the Brahma Sutras and the Upanishads. Between the ages of 12 and 16, he travelled, wrote his commentaries and taught his disciples.

His life was supposed to end at 16, but it is believed that the great sage Veda Vyasa blessed him with another 16 years and urged him to go around the country and spread the knowledge. Therefore his last 16 years were spent in spreading the knowledge throughout India.

Shankara established 4 Mathas (centers of learning) in the North, South, East and West of India in order to maintain Vedic culture and protect it from the influences of other philosophies. It is the responsibility of the Mathas to maintain the teaching tradition of Vedanta.

Even today we remember Adi Shankara’s contributions by chanting the Guru Parampara Sloka before starting a Vedanta class.

Sada Shiva Samarambham (From Lord Shiva, the first Guru,)
Sankaracharya Madhyamam (to Shankaracharya in the middle – middle link in the teaching)
Asmat Aacharya Paryantham (and my Guru at the end,)
Vande Guru Paramparaa (I worship the great Vedanta lineage of teachers.)

Why is it called Advaita Vedanta?

“Dvaita” means two. When you prefix “a” to a Sanskrit word, it becomes negative. So “Advaita” means “not two”, which stands for non-duality.

So to specify which interpretation is being explained, the teaching is called Advaita Vedanta. It’s also correct to call it just Vedanta since there can be only one interpretation of the scriptures.

previous
1.3 The Role of Scriptures
table of contents

next
1.5 Is Vedanta Relevant Today?