This sub-module is based on the teachings of Swami Paramarthananda and Swami Dayananda.
Expand All Sections

In this chapter we’ll take a look at the 5 Sheaths (Pancha Kosha) teaching of Vedanta which comes from the Taittiriya Upanishad. The 5 Sheaths teaching is somewhat similar to the 3 Bodies teaching.

But in the 5 Sheaths classification, the Jiva is divided into 5 (Pancha) layers or sheaths (Kosha) based on the function each sheath performs.

In this function based classification, the Gross Body is called Annamaya Kosha or the Food Sheath. We can also call it the Physical Sheath.

The Causal Body is called Anandamaya Kosha or the Bliss Sheath.

The Subtle Body however is divided into 3 sheaths:

You can also compare the 5 sheaths to Russian Matryoshka dolls. The inner most doll is the Bliss Sheath, covering it is the Intellect Sheath, then comes the Mind Sheath, then Vital Air Sheath, and then the biggest doll is the Physical Sheath. 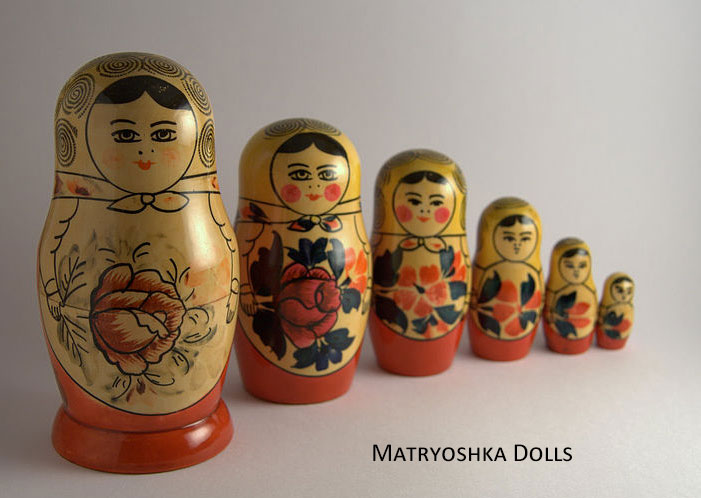 What Are The 5 Sheaths? 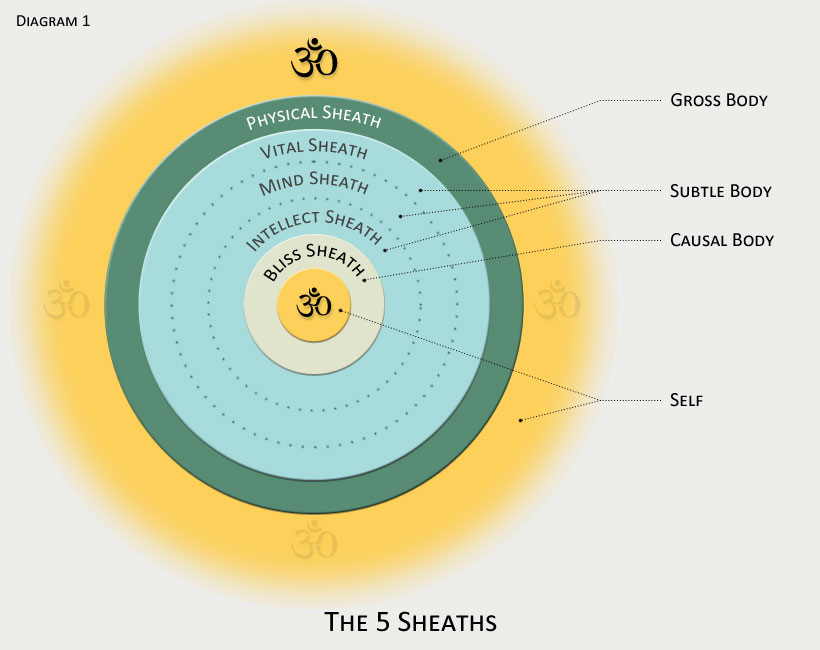 In the 3 Bodies chapter we discussed the 5 Pranas (Life force) of the Subtle Body. The Pranas are responsible for the health and vitality of the body.

They take care of respiration, waste removal, circulation of oxygen and nutrition in the body, converting food into nutrition, and executing the reversal function at the time of emergencies and death.

So the 5 Pranas and the 5 organs of action together form the physiological system of the body. This combination is also called Kriya Shakti or Action Power.

This Kriya Shakti is called the Vital Air Sheath or Pranamaya Kosha.

To summarize; the 5 Pranas are the life force or energy. The 5 organs of action are the tools.

So even though the organs and limbs of the body are present, they do not function because Kriya Shakti (Action Power), the Vital Air Sheath, is no longer present to run them.

But at the same time, if you transplant organs from a newly deceased body to a living person, the organs start functioning once more because of the presence of a Subtle Body in the transplanted body.

This shows that you need a Subtle Body to operate the physical body. 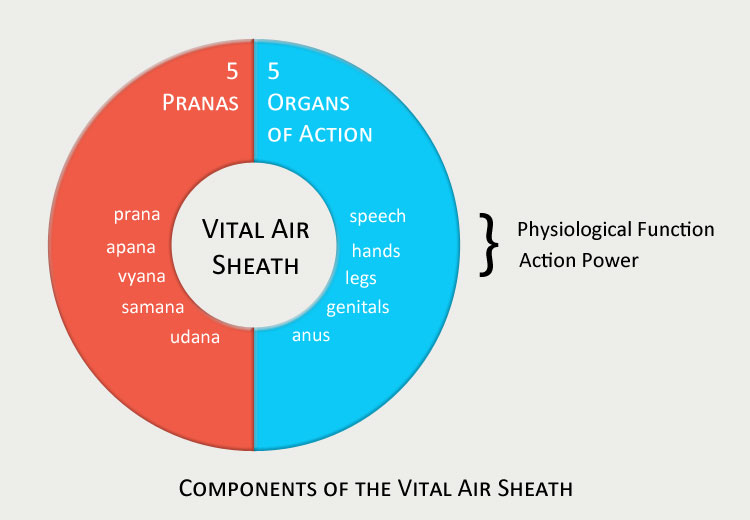 The sheath consists of:

1. The 5 organs of Knowledge.
2. Mind, Memory and Ego of the 4 internal organs 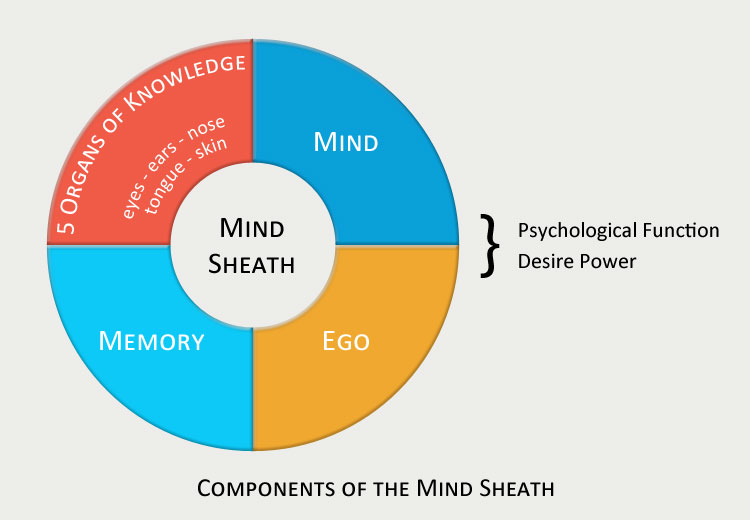 To put it succinctly, the Intellect Sheath knows, the Mind Sheath desires, and the Vital Air Sheath acts.

The Intellect Sheath consists of:

1. The 5 organs of knowledge.
2. Intellect, Memory and Ego of the 4 internal organs.

Memory & Ego are common to both, the Intellect and Mind Sheaths.

We again want to reiterate what we said in the 3 bodies chapter. The 4 internal organs – Mind, Intellect, Memory and Ego – are not actual divisions in the Subtle Body, but functional divisions. It is one organ – Mind (Antahkaranam) – having different names based on the particular function it performs. 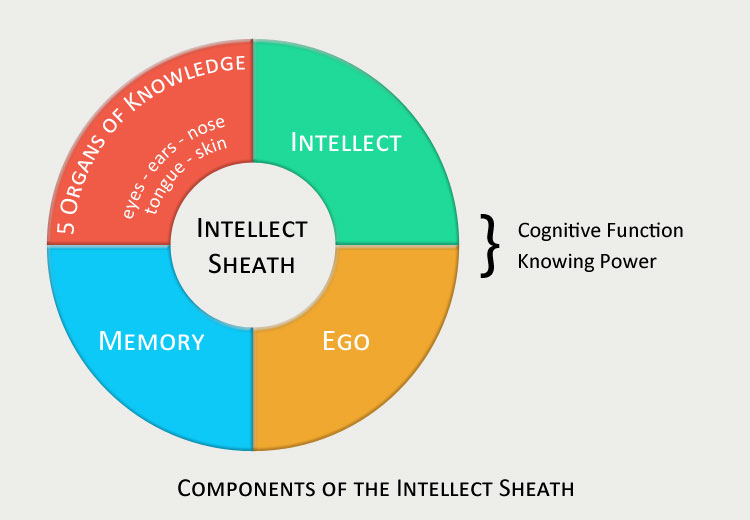 In electronics, a fuse is a mechanism which protects electronic devices against overcurrent. We also have physiological fusing where the body stops registering any pain or loses consciousness when the pain becomes too intense for the body to bear.

Similarly, the mind also requires a psychological fuse when any emotional pain becomes too much to bear. The unconscious is a fuse mechanism for emotional pain.

At certain times when we cannot stand a situation, we have to release the pressure by lashing out verbally or physically, by either crying or shouting.

If we are not able to express the emotion, then the unprocessed emotion gets put in the unconscious. And when the time is conducive these bottled up emotions come out.

That is why we sometimes cry or get angry for no reason.

Another example of the working of the unconscious mind is our extreme reactions to minor events. A person makes a small mistake and we get very angry at him. The intensity of the response does not match the magnitude of the mistake.

Such minor events are not the cause for our response, but only a trigger for the unprocessed emotions in our unconscious to come out.

That is why the unconscious is called the Causal Body. And it is also called the Bliss Sheath because being in the unconscious, it is unknown, and being unknown we are blissfully ignorant and do not feel any pain.

The 5 Sheaths and Self Inquiry

There is one who is self-existent. He (Self) is manifest all the time in the ‘I’ thought. Being distinct from the five-fold Kosha (sheath), he is witness of the three states of experience.

“He” in the above verse refers to the Self. The verse talks about the nature of Awareness. The Self does not depend upon time, place or any object, and is always available. The “I” notion is dependent on the Self, just like the pot is dependent on the clay.

As we saw in the last chapter on the 3 states; the Self is witness to the 3 states of experience i.e. waking, dreaming and sleep.

I am neither the waker, dreamer or sleeper. My real identity is that of the limitless “I”, the substrate for everything.

Koshas are Upadhis for the Self

Expand this section
Close this section
An “Upadhi” in Sanskrit is that which ‘apparently’ lends its attributes to something else.

When a red rose is placed in proximity to a crystal, the crystal appears red. Here the rose becomes an Upadhi because it apparently lends its attribute of ‘redness’ to the crystal.

If we change the red rose to a yellow rose, the yellow rose becomes an Upadhi for the crystal.

Since the attributes of redness and yellowness is only apparently taken on by the crystal, you need not physically remove the flower to make the crystal clear. Crystal is always clear.

Similarly, the various Koshas are Upadhis for the Self. Awareness apparently takes on the attributes of the 5 Koshas.

At the level of the physical body there is the experience as “I am a mortal”, “I am fat” etc., which is a mistake. The body (Annamaya Kosha) apparently becomes an Upadhi for Awareness.

At the Pranamaya (Vital Air Sheath) level there is the experience “I am hungry”, “I am thirsty”, “I am not healthy” etc. The “I” and Prana (Life force) are taken as identical. Prana is Self, but Self is not Prana; it is the witness (Sakshi) of Prana.

“I am restless”, “I am angry”, “I am sad” etc. are experiences at the level of mind (Manomaya Kosha). Restlessness, anger, sadness etc. are states of mind; they are not the Self.

In the same way “I am a doer”, “I am an enjoyer” are experiences at the level of Vijnanamaya Kosha and Anandamaya Kosha respectively, where we again make the same mistake of identifying with the Upadhi.

So if I know myself to be the Self, I am ever-free from the experiences at the level of the 5 Koshas.

The Self is not “covered” by the 5 sheaths

So how can the all-pervasive Awareness be covered by the Koshas?

The problem is that the word Kosha is not properly understood. The Kosha is itself the Self. In a non-dual reality how can the Kosha be anything other than Awareness itself.

Mithya means dependent reality. It is the reality of an object which has no being on its own.

The pot doesn’t have a being without clay. Pot is not an independent object; it is just a name describing a form and a function.

Therefore Mithya is that which has no being of its own, and which has its being or basis in something else.

In other words, every product is Mithya. It is not separate from the material out of which it is made.

And Satyam (or Satya) is the reality in which all things have their being, this reality being the Self.

In the Chandogya Upanishad, the word that is used for this reality is “Sat”. Sat is that which never changes.

The word Satyam can be used only for Awareness and everything else, including elements like space, air, fire etc., is Mithya.

Therefore Vedanta says, idam sarvam brahma, “All this is Brahman (Self)”.

The cause of the entire world is Awareness, and all that is here is Mithya, and is not separate from the cause i.e. the Self.

The Koshas are Mithya

The people who say the Self is covered by the Koshas, also say you have to remove the Koshas to reach the Self.

The 5 Koshas are products of various gross, subtle and causal elements. The elements themselves have no being on their own. They depend on Awareness (Satya) for their existence. Hence the 5 Koshas are Mithya; they have a dependent reality.

You do not have to remove wave to see the water, you only have to recognize that wave is nothing but water.

Similarly you do not have to remove the 5 Koshas to know you’re the Self. The Self is to be recognized as free from the attributes of Annamaya, Pranamaya, Manomaya, Vijnanamaya and Anandamaya Koshas.

previous
7.2 The 3 States
table of contents