This sub-module is based on the teachings of Swami Dayananda, Swami Paramarthananda and Swami Viditatmananda.
Expand All Sections

“Human goals” is translated into Sanskrit as Purushartha. “Purushartha” is a combination of two words; “Purusha” and “Artha”. The word “Purusha” in this context means a human being. The word “Artha” has several different meanings in Sanskrit. One meaning is “Wealth”, another is “Security”; however in this context it refers to a “Goal”.

The 4 human goals are:

These 4 goals can be divided into two sets. The first set, Artha (Security) and Kama (Pleasure) is pursued by all living beings. The second set, Dharma (Ethics) and Moksha (Liberation) is peculiar to humans.

The specific purpose in saying Purusha (Human) is to convey the meaning that these 4 goals collectively are sought after only by humans, not by other living beings. Because of the availability of Purushartha, humans become different than animals and plants. 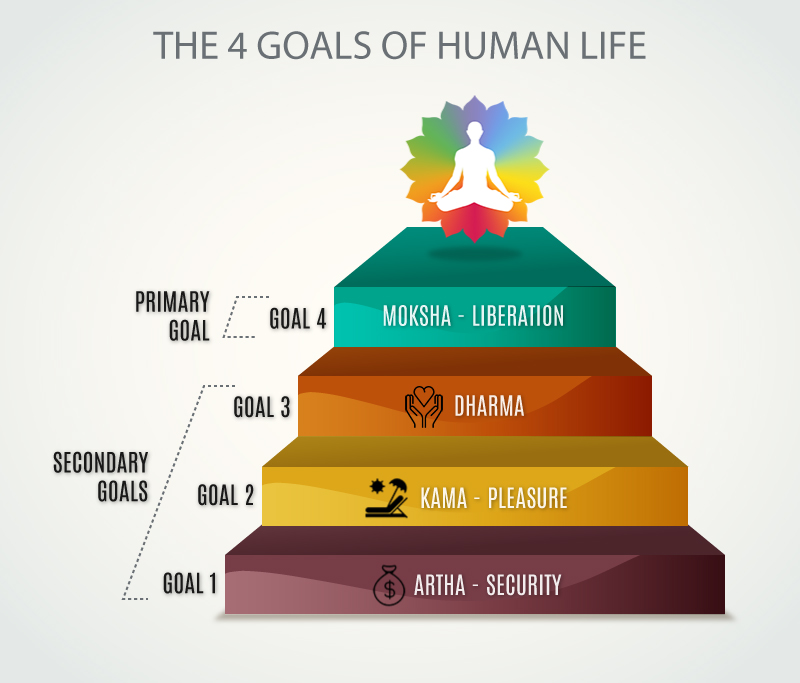 The Reason for Purushartha in Humans

Expand this section
Close this section
Humans and other living beings are similar in several respects; a) they seek food, b) take rest, c) try to protect themselves from the external world (i.e. seeking security) and d) propagation of the species.

The differentiating factor is the faculty of thinking, the intellect (Buddhi). Humans are capable of judgement, reasoning, reminiscing about the past, projecting into the future and planning one’s actions.

This extra faculty of the intellect has a negative side-effect as well. It makes us self-conscious, we become self-judgmental. We develop a complex when we compare ourselves with others.

If we suffer from an inferiority complex, we try to better ourselves in future. So planing for the future becomes a natural consequence of the thinking faculty.

Only humans are capable of these tendencies. Animals and plants live a life based on pre-programmed instincts. Whereas a human life is governed not only by instincts, but also by free will, by the capacity to choose their own future. And because of this capacity of choice, humans entertain lot of goals and these are called Purushartha (human goals).

1. Artha – The Endless Search for Security

Expand this section
Close this section
Artha stands for all forms of security in life: wealth, power, influence and fame.

Even animals and plants seek some form of security. Animals seek shelter, hoard food, a dog buries its bone, a bee fills a honeycomb with honey. So even animals have a sense of insecurity.

However animal behaviour is governed by a built-in program, instincts. Their sense of insecurity is contained, limited, it has an end point. They don’t endlessly brood over security.

For humans, on the other hand, there is no end point. There is no end to the sense of want. The endlessness of human struggle to fulfill their wants can be seen by analyzing experiences.

If I seek money, no matter how much I accumulate, it never seems enough. The sense of inadequacy never leaves me; I never feel secure. I constantly struggle to create more wealth for myself.

This struggle to feel secure by pursuing wealth, power, influence and fame is endless.

2. Kama – The Mercurial Nature of Pleasure

Expand this section
Close this section
Kama stands for all forms of sensual pleasure. Food, travel, sex, music when pursued solely for pleasure fall under Kama.

It’s the next stage after Artha (Security). When a person feels reasonably secure, and if he or she has the means, they pursue pleasure (Kama) based on their likes and dislikes.

Animals also seek pleasures and comforts. However their pursuit is guided by instincts and pre-programmed behaviour. Their enjoyment is not complicated by self-judgement.

A dog or a cat eats until it is full, not concerned by health or aesthetics. Enjoyment begins, ends, and is contained in the moment. There is no prior planning, and no reminiscing afterwards.

Our desires are not only driven by instinct, but also by our own value systems. Our instinctual desires, given by nature, are complicated by our own innumerable and changeable personal desires.

Every person lives in his or her own subjective world, where some objects are desired, some undesired, and others considered neutral.

When I examine my likes and dislikes closely, I find that my attitude towards objects is not consistent. What I desire today, is not desired by me at all times, or at all places.

I also find that objects desired by me are not considered desirable by everyone else. They hold a special value only to me. My desires keep changing. My desires are also time and place dependent.

A “garage sale” is a good example of our changing desires.

In a garage sale, I sell off to others what I once considered valuable. These objects hold no value to me today, but are valuable to others. Similarly what others consider worthless, I find valuable.

Sometimes things which one has sold off as junk is now again considered valuable because circumstances or attitudes have changed.

Our values shift not only with regards to objects, but also towards people, places, situations, ideologies and ideas.

Everything in our life is subject to becoming desirable, undesirable or neutral. Old cars, old houses, old furniture, even wives and husbands, go from one status to another.

This interchange goes on all the time. Subjective values, our likes and dislikes, do not remain the same.

Likes and dislikes dictate the pleasures we seek, and what we want to avoid. Part of seeking pleasure is avoiding what causes displeasure.

Both humans and animals struggle to obtain the pleasant, and avoid the unpleasant. The difference is that the human struggle is not determined by any set pattern, but dictated by fluctuating values. These constantly changing values keeps us ever-struggling.

Expand this section
Close this section
The Sanskrit term Dharma has multiple meanings depending upon the context. We will discuss the topic of Dharma comprehensively in a later sub-module. The explanation given for Dharma in this sub-module is to be understood only in the context of the 4 human goals, and is not a complete definition.

The human goal of Dharma can be thought of as an invisible form of wealth. It manifests in our life in the form of good fortune or good luck, and contributes to our well being. The benefits can be in the form of either Artha (Security) or Kama (Pleasure).

The religious ethics called Dharma are found in the Vedas. The Vedas specify various “do’s and dont’s”, the results of which are in the form of Punya (merit) and Papa (demerit).

According to the rules of Dharma, human action has an immediate tangible result and an unseen result. The unseen result accrues in subtle form to the account of the “doer” of the action. And in time, this result will manifest as either a “good” or “bad” experience in the life of the “doer”, something pleasurable or painful.

If the action had been good, in keeping with the norms of Dharma, the subtle result is Punya (merit), which manifests as a “good” or pleasurable experience in future, either in this life or a future life.

If the action had been bad, breaking the norms of Dharma, the subtle result is Papa (demerit), which manifests as a “bad” or painful experience in this life or a future one.

Papa can also be defined as sin. Sin is the choice of a wrong goal or a wrong means in the pursuit of an acceptable goal. This choice of action will bring an undesired result – the very result that the doer wanted to avoid in the first place.

We pay for our Papa in the form of undesirable experiences. There’s no better encouragement to follow Dharma than to avoid the consequences of Papa.

There’s no good English word for Punya. It just means that the unseen result of “good” actions will bring a desirable experience for you in future.

Ranking of the 4 Human Goals

Since Dharma or good fortune or Punya is achievable by appropriate actions, it also becomes a human goal.

Dharma occupies the first place in the four categories of human goals, because the pursuit of security (Artha), and the pursuit of pleasure (Kama), needs to be governed by ethical standards (Dharma).

Artha, striving for security, comes second because the foremost concern of any living being is security. Once a person is reasonably secure, he starts seeking comforts and pleasure, so Kama (pleasure) comes third .

Moksha, the goal of liberation, comes last because one pursues Moksha only when the limitations inherent in the first three pursuits is realized.

Expand this section
Close this section
Moksha, like Dharma, is a pursuit peculiar only to humans. Even among humans, Moksha is a pursuit followed by only a few. These few recognize that what they want is not more security or pleasure or Punya, but freedom from all “binding” desires, freedom from the sense of insecurity.

Moksha is inner freedom, freedom from slavery or attachment to Dharma, Artha and Kama.

The pursuits of Dharma, Artha and Kama, are based on the sense that “I am insecure, I am unhappy, I am mortal, I must become somebody.” As a limited person, I must fulfill my urge to become bigger and better than I now take myself to be.

How can this urge be fulfilled? By more Dharma, Artha and Kama.

I must realize that simply adding more Dharma, Artha and Kama will not alter my basic sense of limitation.

The scriptures provide an example to illustrate this point. Take a simple broomstick and tie a silk string around it. The add a silver string, and next a golden string. Finally tie a diamond necklace around the broomstick.

Now stand back and admire the broomstick. What do you see?

A broomstick! A decorated and bejeweled broomstick it maybe, but it’s still just a broomstick.

A person who sees this example as a description of his own experience seeks Moksha.

How Does One Become A Slave to Dharma-Artha-Kama

Any object or person can enslave us in two ways:
1) An object can agitate our mind by its very absence. When we want an object, but do not have it, its absence creates a sense of limitation, emptiness and incompleteness within us. We become obsessed with the object’s absence.
2) An object or person an enslave us by its presence also. Such objects or persons usually by their presence create stress and tension within us.

Some objects like money create problems by both their presence and absence.

This attachment and aversion to external objects is bondage. Freedom from this sense of bondage is self-mastery. I am no longer a slave, but a master.

When things are absent, I do not feel limited. And when things are present, they do not create a strain on me. Moksha means being okay, with or without, Dharma-Artha-Kama. This inner strength, inner maturity, inner mastery is called Moksha.

The first three (Dharma-Artha-Kama) are secondary goals, while the last one (Moksha) is the primary goal of human life. In the former slavery continues, while in Moksha alone one is no longer a slave of anything.

next
2.2 The Fundamental Problem