This sub-module is an exact representation of a Satsang written by James Swartz.
Expand All Sections 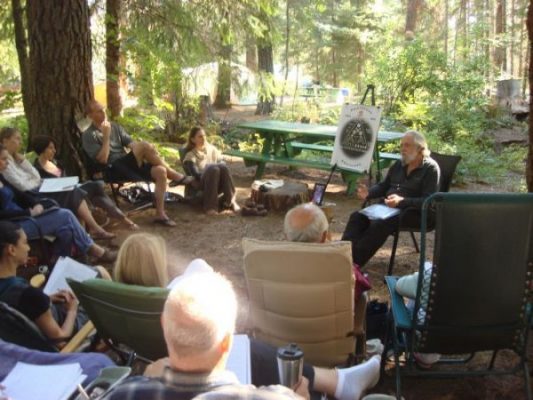 If the problem is ignorance and enlightenment is the understanding backed by experience that “I am limitless,” to say that there are stages of enlightenment is like saying that a woman is a little bit pregnant.

Contrary to popular belief, no enlightened person is more or less enlightened than any other, because the self is one unchanging awareness.

Then how does one account for the apparent differences in understanding and experience that one sees from one enlightened being to another?

There Is No Enlightenment for the Self

Just as a spider is both the substance of its web and the intelligence that shapes it, the self appears as the world and shapes the individual entities in it. What is called experience is the self functioning through the various entities (plant, animal and human) just as electricity functions through various appliances.

Expressing through a bulb it produces light, through a heater heat, through a radio sound. Though the manifestations are superficially different, all are just electricity transformed by its contact with the appliance.

The concept “enlightened person” is not strictly correct, unless the self is thought of as a person. In fact in some scriptures the self is referred to as the “universal” person, but this does not mean that the self is a person as we understand it.

“Impersonal” or a “state” are perhaps more accurate words to describe the self, but certain minds have trouble with abstract concepts, so to make it understandable to this kind of mind it is sometimes called a “supreme” person, or God. The word “person” is used because people are the most conscious objects in the creation and the self is consciousness.

A Change in Understanding

Expand this section
Close this section
There are no enlightened beings, because there is only one formless self. So when knowledge destroys a person’s sense of individuality, the individual becomes the self by default.

The becoming is not a physical change or the experiential removal of the individual. It is a change in understanding.

Just as knowledge of the nature of a mirage will prevent one from taking it to be water, the knowledge that “I am the self” allows one to understand that the experiencer, the individual, is only an apparent, not a real, self.

The Vasanas Continue to Exist

Expand this section
Close this section
An enlightened being is just the self functioning through a mind whose self-ignorance has been removed.

But the removal of self-ignorance does not automatically remove the Vasanas in the mind, although it eventually renders them non-binding, since they bind only because of ignorance.

Since from the self’s point of view all the Vasanas are known to be only the self; it has no preferences as to the type of Vasana it illumines. Therefore it works through the existing Vasanas.

Because the Vasanas are the cause of the mind’s energy, attitudes and opinions, ignorance and knowledge, and every mind has unique and varied experiences, the self seems to be unique and varied.

This seeming is caused by lack of discrimination, the power to separate the real from the experiential, so that an indiscriminate person will wrongly assume that there are many types of enlightened beings and many stages of enlightenment.

The 3 Stages of Enlightenment

Nonetheless, from the individual’s point of view there are three stages of enlightenment.

Expand this section
Close this section
The first stage might well be called endarkenment. We come into this life experiencing our limitlessness and oneness with everything, but because the intellect has yet to develop, we do not understand what we are experiencing.

When the intellect does develop, it is trained to think of the self as a limited, incomplete, inadequate creature, and encouraged to solve the problem of inadequacy by picking up experience in life. At a certain point, the individual comes to realize that no matter how much experience he or she can garner, the experienced objects and activities do not do the job.

This is usually an unpleasant realization, often resulting in a profound disillusionment with life and is frequently referred to as “the dark night of the soul” in religious literature, or “hitting bottom” in popular culture.

Most react to this existential crisis by sinking into distracting habits, mind-numbing substances and/or frivolous entertainments, but for unknown reasons a few begin to enjoy a variety of peculiar and invariably confusing religious or spiritual experiences that lead them to the idea of God or some sort of inner light or higher state.

And at some point during this period the person becomes convinced that he or she can find happiness within or in some relationship with God.

Expand this section
Close this section
The second stage might be termed the seeking or questing phase and usually heads off in two apparently separate directions.

The religious road leads to the development of a personal relationship with God, who is conceived as a pure and perfect
someone, other than oneself.

The idea of the self as inadequate, incomplete and separate is retained and often conceived of as corrupted by sin.

Salvation is meant to lie in invoking the grace of God through prayer and the study of scripture and working hard here on earth for a place in the Promised Land, a heaven far from this veil of tears which can only be accessed by relinquishing the physical body.

The religious life offers a positive alternative to the belief in the world as a source of meaning.

The other branch of the road leads in a less doctrinal and belief-laden direction, into the experience of the inner world and an investigation of the self.

In its worldly form it may incline one to the study of psychology, but in its spiritual form the person experiences epiphanies, fleeting samadhis, satoris and the like, that give rise to the conviction that the the truth dwells within as the higher or inner self or as some transcendental state of consciousness.

He or she will probably characterize the changes during this phase as an “awakening.”

Although the experience of the inner self/truth/state is invariably uplifting and intensifies one’s quest, it is always confusing because the information one gathers challenges the habitual view of oneself as a needy, incomplete, inadequate, separate creature.

Many of these experiences can truthfully be described as the experience of oneness with all things, limitlessness, and of transcendent bliss.

Terms from different traditions that indicate an experiential glimpse of God, the Void, the inner self, etc. Often persons who have had out-of-body or near-death experiences see the self in this way.

During this stage, which might be also called the meditation stage, the mind, formerly riveted on happenings in the outer world, turns inward and fixes itself on the self, the light within, and at some point, usually after intense investigation, realizes the self, since the self is the source of all experience.

This realization is always in the form of an experience and is thought by many to be the end of the search – and the ultimate state. But Vedanta says that while this is a welcome and enjoyable state it is not the end, because there is still a sense of separation between the experiencer and the object of experience, the self.

So when the experience happens the intellect gets submerged in the bliss, peace and radiance, and switches off, as it does in most intense sensuous experiences, and stops inquiring.

To enter the final stage, which is not a stage, inquiry must continue during the experience of the self.

In ordinary perception a thought wave arises in the mind that corresponds to the nature of the perceived object. You see a tree and you know it is a tree because the self, awareness, illumines the thought of tree as it arises in the intellect.

Similarly, when the ego experiences the reflection of the self in a pure mind, a thought corresponding to the nature of the self called an Akandakara Vritti, an unbroken I-thought, arises, and this thought needs to be owned.

When it is taken as one’s own, it is this I-thought, backed by experience, that destroys the notion in the ego/mind that it is limited, incomplete and separate.

In other words, one becomes the self. Unlike an experience, the self can never be lost, because it is me, the basis of everything – and there is nothing other than it to lose it. 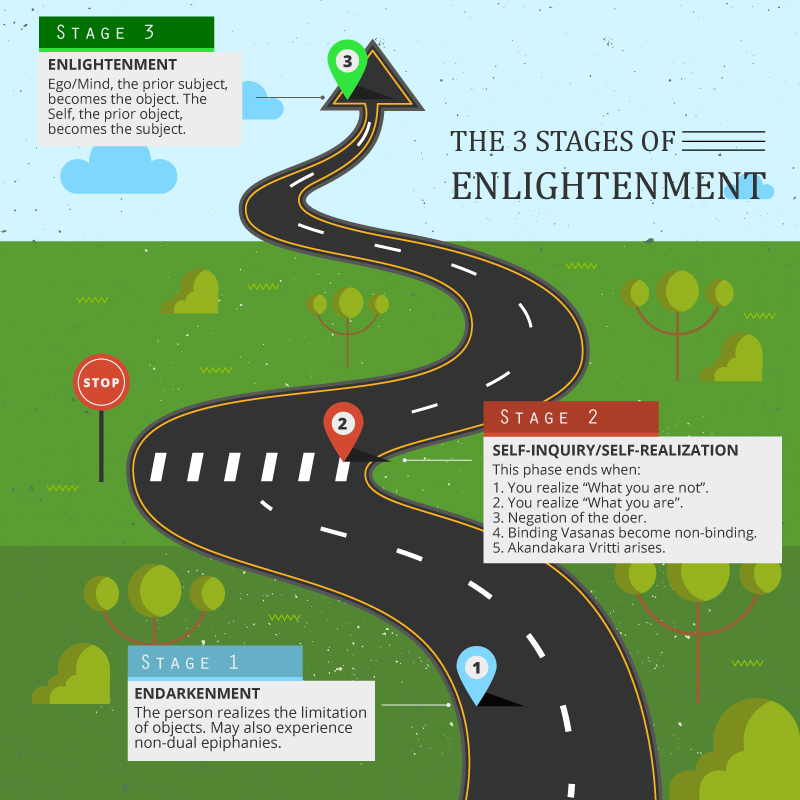 previous
8.8 I Am Not The Doer
table of contents

next
9.1 The 5 Capsules of Vedanta